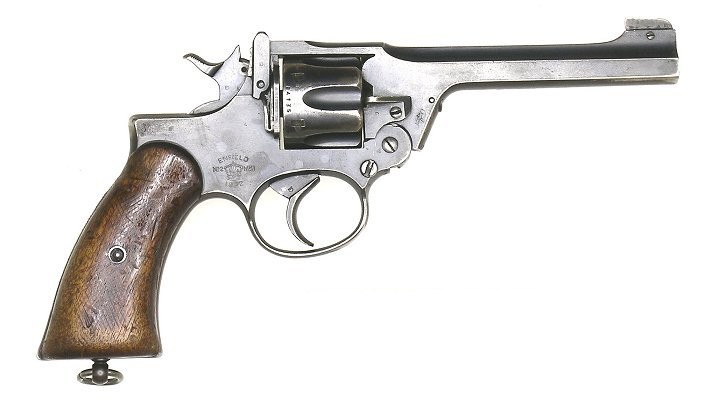 A break action six-shot revolver based on the Webley Mk6 but in .38 S&W rather than .455 calibre. The Enfield No.2 is a well made and accurate revolver but .38 S&W is a Nancy Boy cartridge in comparison to the butch and manly .455 and is best suited to disposing of unwanted kittens and hamsters, rather than bringing down charging SS stormtroopers.

Why they adopted the whimpy .38 S&W and not the more adequate .38 Spl (158gn doing 950 fps & generating 430ft-lb) is a total mystery. Apparently there was a dominant school of thought in the British military that heavy, slow bullets were better manstoppers than faster, lighter ones, even though this is contrary to most informed opinion. In addition, the long 200gn bullet was alledgedly a little unstable and tumbled when it hit bad guys (where've we heard this before?)

The original British specification for a submachine gun, or 'machine carbine' as they were called in British parlance at the time, was that it should chamber .380/200 to simplify ammunition supply issues in the field. But then someone pointed out that this was a totally ridiculous and unworkable suggestion.

It is however doubtful whether anyone other than the owner has ever been hurt by a pistol wielded by an officer. Data from WW2 shows that pistols caused more injuries to those who carried them than to the enemy [See The Face of Battle by John Keegan for instance] After all, the reason an officer gets a pistol is so that he doesn't go shooting at things but rather works out what his men should be shooting at.

As a wartime economy measure (and as a sop to the cavalry who wouldn't wear a closed holster & complained that the hammer spur caught on bits of the tank when bailing out), the hammer spur was deleted and the revolver was made double-action only (No.2 Mk.1*). As a further economy, the trigger safety was deleted (normally a bar blocks the striker unless the trigger is correctly pulled so that if the pistol is dropped or the hammer is thumbed back & dropped accidentally it doesn't go off), thus rendering the revolver not drop safe (No.2 Mk.1**).

So, there you have it - the Enfield No.2 Revolver: yet another one of many British Military Procurement Mysteries.

In the early '70s I was issued one of these as a personal protection weapon, whilst I worked with the UDR for two weeks. I was issued six rounds of 1950s dated ammo. Before handing it back to the armoury I fired the six rounds: two were misfires, two just managed to get the bullets out of the barrel, one fired correctly and the other round lodged in the barrel.