Private Johnson Beharry VC, was born in Grenada on 27 July 1979. He came to the UK on 6 August 1999 and enlisted in the Princess of Wales's Royal Regiment (PWRR) in August 2001. After completing his training at the Infantry Training Centre, Catterick, he joined the first Battalion of the PWRR in March 2002. Before joining the Army he worked in the construction industry.

His citation reads in full:

Private Beharry carried out two individual acts of great heroism by which he saved the lives of his comrades. Both were in direct face of the enemy, under intense fire, at great personal risk to himself (one leading to him sustaining very serious injuries). His valour is worthy of the highest recognition.

In the early hours of the 1st May 2004 Beharry's company was ordered to replenish an isolated Coalition Forces outpost located in the centre of the troubled city of Al Amarah. He was the driver of a platoon commander's Warrior armoured fighting vehicle. His platoon was the company's reserve force and was placed on immediate notice to move. As the main elements of his company were moving into the city to carry out the replenishment, they were re-tasked to fight through a series of enemy ambushes in order to extract a foot patrol that had become pinned down under sustained small arms and heavy machine gun fire and improvised explosive device and rocket-propelled grenade attack.

Beharry's platoon was tasked over the radio to come to the assistance of the remainder of the company, who were attempting to extract the isolated foot patrol. As his platoon passed a roundabout, en route to the pinned-down patrol, they became aware that the road to the front was empty of all civilians and traffic - an indicator of a potential ambush ahead. The platoon commander ordered the vehicle to halt, so that he could assess the situation. The vehicle was then immediately hit by multiple rocket-propelled grenades. Eyewitnesses report that the vehicle was engulfed in a number of violent explosions, which physically rocked the 30-tonne Warrior.

As a result of this ferocious initial volley of fire, both the platoon commander and the vehicle's gunner were incapacitated by concussion and other wounds, and a number of the soldiers in the rear of the vehicle were also wounded. Due to damage sustained in the blast to the vehicle's radio systems, Beharry had no means of communication with either his turret crew or any of the other Warrior vehicles deployed around him. He did not know if his commander or crewmen were still alive, or how serious their injuries may be. In this confusing and dangerous situation, on his own initiative, he closed his driver's hatch and moved forward through the ambush position to try to establish some form of communications, halting just short of a barricade placed across the road.

The vehicle was hit again by sustained rocket-propelled grenade attack from insurgent fighters in the alleyways and on rooftops around his vehicle. Further damage to the Warrior from these explosions caused it to catch fire and fill rapidly with thick, noxious smoke. Beharry opened up his armoured hatch cover to clear his view and orientate himself to the situation. He still had no radio communications and was now acting on his own initiative, as the lead vehicle of a six Warrior convoy in an enemy-controlled area of the city at night. He assessed that his best course of action to save the lives of his crew was to push through, out of the ambush. He drove his Warrior directly through the barricade, not knowing if there were mines or improvised explosive devices placed there to destroy his vehicle. By doing this he was able to lead the remaining five Warriors behind him towards safety.

As the smoke in his driver's tunnel cleared, he was just able to make out the shape of another rocket- propelled grenade in flight heading directly towards him. He pulled the heavy armoured hatch down with one hand, whilst still controlling his vehicle with the other. However, the overpressure from the explosion of the rocket wrenched the hatch out of his grip, and the flames and force of the blast passed directly over him, down the driver's tunnel, further wounding the semi-conscious gunner in the turret. The impact of this rocket destroyed Beharry's armoured periscope, so he was forced to drive the vehicle through the remainder of the ambushed route, some 1500 metres long, with his hatch opened up and his head exposed to enemy fire, all the time with no communications with any other vehicle. During this long surge through the ambushes the vehicle was again struck by rocket-propelled grenades and small arms fire. While his head remained out of the hatch, to enable him to see the route ahead, he was directly exposed to much of this fire, and was himself hit by a 7.62mm bullet, which penetrated his helmet and remained lodged on its inner surface.

Despite this harrowing weight of incoming fire Beharry continued to push through the extended ambush, still leading his platoon until he broke clean. He then visually identified another Warrior from his company and followed it through the streets of Al Amarah to the outside of the Cimic House outpost, which was receiving small arms fire from the surrounding area. Once he had brought his vehicle to a halt outside, without thought for his own personal safety, he climbed onto the turret of the still-burning vehicle and, seemingly oblivious to the incoming enemy small arms fire, manhandled his wounded platoon commander out of the turret, off the vehicle and to the safety of a nearby Warrior. He then returned once again to his vehicle and again mounted the exposed turret to lift out the vehicle's gunner and move him to a position of safety. Exposing himself yet again to enemy fire he returned to the rear of the burning vehicle to lead the disorientated and shocked dismounts and casualties to safety. Remounting his burning vehicle for the third time, he drove it through a complex chicane and into the security of the defended perimeter of the outpost, thus denying it to the enemy. Only at this stage did Beharry pull the fire extinguisher handles, immobilising the engine of the vehicle, dismounted and then moved himself into the relative safety of the back of another Warrior. Once inside Beharry collapsed from the sheer physical and mental exhaustion of his efforts and was subsequently himself evacuated.

Having returned to duty following medical treatment, on the 11th June 2004 Beharry's Warrior was part of a quick reaction force tasked to attempt to cut off a mortar team that had attacked a Coalition Force base in Al Amarah. As the lead vehicle of the platoon he was moving rapidly through the dark city streets towards the suspected firing point, when his vehicle was ambushed by the enemy from a series of rooftop positions. During this initial heavy weight of enemy fire, a rocket-propelled grenade detonated on the vehicle's frontal armour, just six inches from Beharry's head, resulting in a serious head injury. Other rockets struck the turret and sides of the vehicle, incapacitating his commander and injuring several of the crew.

With the blood from his head injury obscuring his vision, Beharry managed to continue to control his vehicle, and forcefully reversed the Warrior out of the ambush area. The vehicle continued to move until it struck the wall of a nearby building and came to rest. Beharry then lost consciousness as a result of his wounds. By moving the vehicle out of the enemy's chosen killing area he enabled other Warrior crews to be able to extract his crew from his vehicle, with a greatly reduced risk from incoming fire. Despite receiving a serious head injury, which later saw him being listed as very seriously injured and in a coma for some time, his level-headed actions in the face of heavy and accurate enemy fire at short range again almost certainly saved the lives of his crew and provided the conditions for their safe evacuation to medical treatment.

Beharry displayed repeated extreme gallantry and unquestioned valour, despite intense direct attacks, personal injury and damage to his vehicle in the face of relentless enemy action. 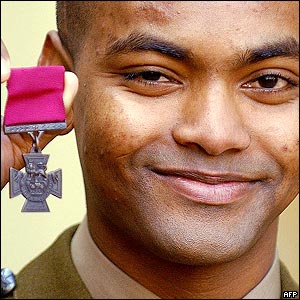 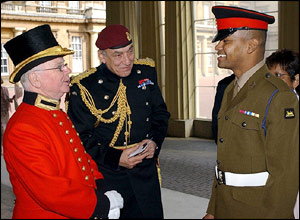 A selfless and exceptionally brave man who's citation is not only inspiring and humbling but typifies why the Victoria Cross is so seldomly awarded.

At Westminster Abbey during the Remembrance Day service November 2009 Beharry refused to shake Gordon Brown's hand. The winner of the Victoria Cross said Mr Brown had repeatedly disrespected him, his uniform and the Armed Forces. <Way to go dude!>

“When he offered his hand to me I just turned around and walked away. I wanted him to think about his actions and it worked.”

Read more about his life in his autobiography, Barefoot Soldier.