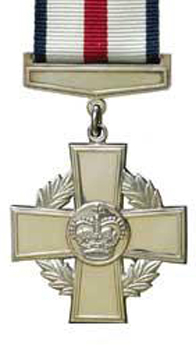 A cross pattée in silver mounted on a wreath of laurel leaves. The obverse of the medal (shown here) bears in the centre a circular medallion depicting St. Edward's crown. The reverse is plain in design and bears the rank, name and unit of the recipient. The date of the award is also engraved.

A silver bar may be issued to CGC holders performing a further act of such gallantry which would have merited award of the CGC, though none have been awarded to date.

White with narrow stripes of dark blue at each edge and a central stripe of crimson.

All ranks of the RN, RM, Army, and RAF in recognition of acts of conspicuous gallantry during active operations against the enemy.

The CGC is at the level below the Victoria Cross.