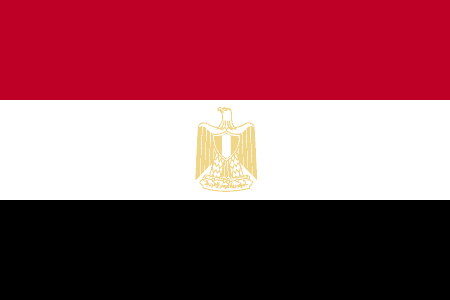 Land of the pharoahs and one of the less rabid Arab nations. Seen as generally pro-Western. Egypt is still of commercial importance as it controlls access to the Suez Canal, though this is not as militarily vital as it once was, and I doubt the Egyptians would be stupid enough to repeat the Suez Crisis, as it would wreck their lucrative tourism industry - one of the main reasons they're 'on side'.

Getting their Arrse Kicked

Recipient of one of the fastest shoeings in history outside of Dale the Snail getting her back doors kicked in.

In May 1967, Egypt massed 1000 tanks and 100,000 troops on its border with Israel and called for all Arab nations to wipe the Jews out. Just after dawn on June 5, Israel launched a pre-emptive attack against Egypt's airforce destroying almost all of it on the ground. Blitzkrieg tactics that would have brought a tear to Rommel's eye, excellent leadership and a realization it was win or face extermination resulted in some very motivated Jews.

By the end of the war, Israel had gained control of the Sinai Peninsula and the Gaza Strip from Egypt: the West Bank and eastern Jerusalem from Jordan; and the Golan Heights from Syria. This is known as the Six Day War and its never spoken about down Cairo way.

OK, it took six years for the Egyptians to think up a decent retort to their kicking in '67 but in 1973 they came back with a magnificent response. This was made possible by a junior officer of engineers realising that the Israeli defences along the Suez Canal (the Bar_Lev line) were actually just a long sand castle and so they washed them away with a big hose.

The assault infantry that then crossed the canal dug in and used sagger missiles to maul the IDF counter attacks. Thus proving, not for the last time, that an angry man with tea-towel on his head can kick your back doors in even if you are sitting in a Centurion tank ... provided he has enough missiles to send down range, of course.

Unfortunately Egypt had arranged to hold their trip out to Tel Aviv in concert with their chums from Syria. The Syrians lived up to the Arab reputation for generally being pants when fighting anyone who fights back and, ably assisted by soviet military advisors, collapsed allowing the Israelis to concentrate on teaching the Egyptians that they had missiles too as they used French made ATGW's to do unto the arabs as the arabs had done unto them.

The modern Egyptian army is equipped with, amongst other western kit, M1 Abrams tanks and might come as a shock to the IDF in a future conflict. Not that that's likely so long as I, and thousands like me, are spending thousands of quid each year going snorkelling off Sharm el Sheikh.