From ARRSEpedia
(Redirected from Hood)
Jump to: navigation, search 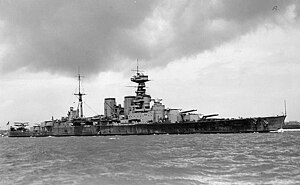 HMS Hood is most probably the most famous HM ship to serve during WW2, even though she was seen to an end by the Bismark, respect will always be paid!

On a historical note, had she been brought into docks for the uparmouring she was due instead of being used for ceremonial duties in every far-flung corner of the Empire, she might come off rather better in her final encounter.