This page is about the wood & string arrow-chucker. If you came here looking for a scary helicopter, you need the Apache page.

An archery bow that is long. Okay, maybe that's a bit bleeding obvious. A bow that is approximately as long as the wielder is tall, and the iconic, if not mythological (see the “Angel of Mons”), weapon of English mediaeval armies.

There is some controversy regarding the actual length; if it is accepted that the average mediaeval foot-slogger was between five feet two and five feet five in height the romantic image of the Stout Yeoman Bowman does tend to be replaced by that of a malevolent hobbit hell bent on rapine and plunder. 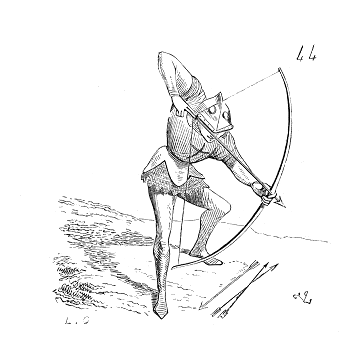 Truly traditional English longbows are, “self,” bows (made from a single sort of wood rather than a laminate). In the case of the English Longbow - it’s made from yew wood. The heartwood of the tree provides the compression strength and belly of the bow and the tensile sapwood forms the back of the bow and prevents it from snapping. Other woods such as wych, hazel and ash are valid substitutes.

While the pull weight (how powerful the bow is) of a normal bow is about 50lbs, a Longbow can get up to 150-200lbs pull weight. All that energy is imparted into the arrow resulting in the arrow arriving with one hellova punch. The arrows DO NOT punch through plate armour though. They have no true anti-armour defeating capability but they will go through chain mail (which is mostly empty space) and into flesh quite happily.

One 14th century post-mortem reporte describes the fatal wound from an arrow as, " ...three inches long by two inches wide and six inches deep." In the vernacular of the time: Iteme: hole, one, fcukynge greate.

At the beginning of the mediaeval period, the Bowman was not held in particularly high esteem by the knightly and educated classes.

Bearing in mind that the bow is a stand-off weapon, cheaply made, it sort of put the mockers on the concept of Chivalric single combat between two opponents expensively trained, horsed, equipped and armoured using their skill at arms to defeat (not necessarily kill – ransoms were big business) each other as the decisive factor in war.

Writers of the time are generally scathing of the man:-

In the time of King Stephen, Geoffrey de Mandeville was killed at Burwell Castle by an arrow loosed by, “a very low-class archer.”

Archers were variously described as “brave in waging war with beasts, in nought besides,” and using, “that weapon of a dastard.” And the Second Lateran Council, in 1120, went so far as:

(“We prohibit under anathema that murderous art of crossbowmen and archers, which is hateful to God, to be employed against Christians and Catholics from now on.” – 2nd Lateran Council.)

Early mediaeval illustrations show a man possessing a bow and not much else. His clothing, such as it was, more appropriate to a pole-dancer (at least for the first eight bars) than war fighting. Think of renaissance cherubim – only less clean and uglier - and you pretty much have the picture.

In the later mediaeval period he would have a Jupon (quilted coat worn over a breastplate) and a Chapel de Fer – which was still the design for the, “Tin Lid” until issue of the 44 pattern helmet!

English Archers at the time of the 100 Years War launched arrows en mass - called an arrow storm - each archer being reckoned at this time to be able to loose 10 to 12 arrows per minute (which compares favourably with the 1914 standard of 15 aimed rounds per minute from the Lee-Enfield). Think of 500 squaddies with Minimi's going full auto and unloading down range - even better in some ways, since the targets can see the arrow storm coming. Very bad for morale.

Froissart refers to bowmen being deployed in a, “herce”. Since this is a mediaeval harrow, a rectangular or square formation might be indicated. However no scholars have ever been able to agree on what he actually meant.

Several nations have used longbows (such as the Japanese and Indians - the ones in India, not the ones the Spams oppressed) but the most famous is the one made famous by the Welsh and the English.

The longbow was replaced as a viable weapon by gunpowder weapons, not because they were better but because it took years to train a longbow man, whilst a peasant could be taught to operate a handgun (basically a small hand held cannon) in a few weeks. It wasn't until the Crimea that what became the British Army had a weapon that could be said to be superior in terms of accuracy and firepower.

The Chronicles of Froissart

The Angel of Mons