The Royal Wessex Yeomanry is the only reserve army armoured regiment (Yeomanry) consisting of four squadrons, each of which bears the cap badge of an old yeomanry regiment: 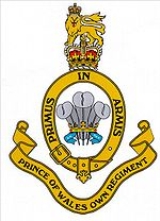 The Royal Wessex Yeomanry, which was formed in 1971, currently serves the role of Armoured Resilience, forming partial and complete replacement crews for the 3 Armoured regiments, RTR, KRH and QRH. It also trains liaison officers advisers and instructors in the use of ISTAR (Information, Surveillance, Targeting, Acquisition and Reconnaissance) equipment.

HRH Prince Edward, the Earl of Wessex, is the Royal Honorary Colonel of the Royal Wessex Yeomanry.

In 1947 the Territorial Army was reconstituted, but the subsequent history of the Yeomanry regiments continued to be one of constant change. There were 26 regiments of the reformed Royal Armoured Corps, TA, and 24 regiments of the Royal Artillery, TA (there had been altogether 53 regiments of Yeoman gunners during the war).

Major re-organisations of the TA took place in 1951, 1956 and 1961 - many of the Royal Armoured Corps regiments were amalgamated as were most Gunner regiments.

During the National Service years a number of regiments provided the continuation training for both national servicemen and reservists.

The greatest re-organisation of all however took place in 1967. The majority of Territorial Army regiments were then reduced or disbanded and those which remained were divided into four categories of the Territorial Army and Volunteer Reserve (TA & VR), with different Terms of Service and commitment.

Some Yeomanry regiments struggled on as TA&VR III regiments but, starved of equipment and funding, they inevitably dwindled. Others, however, managed to retain cadres - establishments of a few officers and NCOs - but most of the remaining Yeomanry establishments were of sub-unit size.

A new major unit of the RAC was formed, named The Royal Yeomanry Regiment and was given an Armoured Reconnaissance role.

This new structure was to last until the Strategic Defence Review (SDR) of 1998. In July 1999 the Regiment merged with The Dorset Yeomanry and was again re-organised and re-roled.

As part of the Royal Armoured Corps (RAC) The Royal Wessex Yeomanry is the South West of England's only Yeomanry regiment.

The Royal Wessex Yeomanry has four squadrons and has TA centres in the counties of Devon, Dorset, Gloucestershire and Wiltshire.

The RWxY trains Yeomen in a unique role, both replacement, Drivers, Gunners, Operators and (in the near future) Commanders for the Challenger 2 .

The three roles are shared between all four squadrons who, in addition, maintain basic soldier skills and fitness.

A Sqdn (Dorset Yeomanry) were formally the Armoured Replacement Squadron, due to their proximity to RHQ they are to rerole as HQ (Dorset Yeomanry) Sqdn. They will continue to train Challenger crewmen along with signals and liaison specialists.

B (Royal Wiltshire Yeomanry) and C (Royal Gloucestershire Hussars) Sqdns will remain in their role of training CR2 Turrent cres and drivers. They also have (limited number) of facilitators, chefs, clarks and medics. B sqdn will absorb a troop of Royal Yeomanry from Swindon due to the disbanding of that sqdn and reorganisation.

D (Royal Devon Yeomanry) Will rename as A Sqdn, and move it's location from Barnstaple to Exeter and will keep its' Paignton location.

Unusually, B Sqn is the senior of the four squadrons of the regiment. This is because the RWY is the senior Yeomanry regiment in the Yeomanry Order of Precedence, having been raised in 1794. It is not designated as A Sqn (which would be the usual practice) because there is an A (Royal Wiltshire Yeomanry) Sqn of the Royal Yeomanry with which it could be confused.