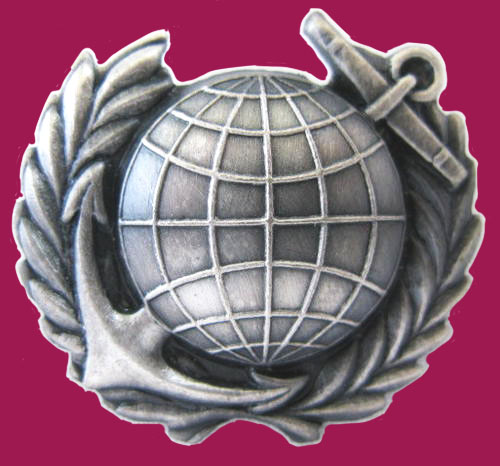 The second South African Marine Corps was formed in 1979 in order to enable the South African Navy to take a greater part in counter-insurgency operations. A brigade strength unit was envisaged and was designated as 1 Marine Brigade. However, training and operational units never exceeded one or two battalions in strength. The initial vision was for a fully sea-born amphibious brigade that could be deployed on operations in the southern Angolan and Mozambique regions / ports. However, budget cuts, a greater emphasis on land based raids into southern Angola by the SADF as well as the strong defensive capabilities of the major Angolan ports led to the original plans being changed. A more limited role role was envisaged, which included developing a force capable of providing beachhead protection to allow the extraction of special forces when required.

The Marines also trained and fielded a small reconnaissance detachment between 1983 and 1989. Based opposite the submariners, within the same basin, within Simonstown harbour, they came under the direct control of the Marine Commanding Officer (and not with 111 Harbour Protection Unit (HPU) at the open anchorage boathouse) , they received infantry, airborne, diver, reconnaissance and urban counter meassures training from other army units within the SADF. A limited Marine amphibious landing capability, using Delta boat landing craft from SAS Tafelberg, was retained until the brigade was disbanded.

The initial officer cadre of the brigade was drawn from South African Infantry units[8] as well as a number of officers from the Rhodesian forces. Senior NCO’s were selected from the South African Navy and Rhodesian Light Infantry squadrons. Officers were required to complete all SADF infantry training courses as well as specialised navy training courses for promotional purposes. Recruit training focused on regimental training as well as conventional warfare, which was then followed by rural counter-insurgency operations. After this training, some recruits moved into specialist fields whilst the majority were posted on a rotational basis to naval units and to operational deployments in South West Africa. Advanced training was carried out with 44 Parachute Brigade for conventional amphibious operations, with 4 Reconnaissance Regiment (See South African Special Forces Brigade) for small tactics amphibious operations and with 1 Reconnaissance Regiment in Durban for advanced urban counter-insurgency operations. Forward Observation Officer / Fire control training, involving directing ship's artillery fire onto enemy position targets from within enemy territory, was also regularly conducted with naval strike craft in northern Zululand. Brigade staff members were responsible for defining SADF amphibious warfare doctrine.

Together with the SA Navy and 44 Parachute Brigade, the Marines demonstrated their capability during a small amphibious exercise held during the negotiations on Angola and Namibia - Exercise "Magersfontein", in Walvis Bay in September / October 1988. It was referred to by senior Cuban officers as having convinced them that "the South Africans were serious" and certainly influenced the negotiations.

Operations included deployments to Sector 10 in central Owambo for counter insurgency operations as well as deployment in support of SADF and SWATF units during Operation Daisy in November 1981 and later SADF raids into southern Angola. Subsequently, the Marines were withdrawn from Section 10 and re-deployed to Sector 70 in the north east of South West Africa, where deployments were made from Wenela in the eastern Caprivi covering a 50 km land border with Zambia to the west and 200 km of riverine border to the east. The Marines occupied the most easterly point of South West Africa - a tiny island at the confluence of the Zambezi and Chobe rivers, observing and photographing vehicle traffic crossing the Zambezi on the Kazangula ferry.

In combat dress the Marines were distinguished by a black beret, web belt and boots, worn with nutria brown fatigues. Early Marines were distinguished by being issued with the H&K G3 7.62 LAR as opposed to the traditional FN FAL used by the SADF. The G3’s were later replaced by the SADF standard R4 assault rifle and later R5s. It is rumoured[who?] that these G3’s were taken from an arms consignment captured when Special Forces and the South African Navy destroyed one ship and captured another in Namibe harbour in southern Angola. The G3’s being the Navy’s part of the bounty.

The Marines were disbanded on 18 January 1990, following a major restructuring of the Navy at the end of the South African Border War.

It is planned that this squadron will eventually be a battalion sized unit. Currently it consists of roughly two companies.

Members are sailors and use Naval ranks. They are trained in infantry combat up to company sized operations. They are also used for crowd control and conduct peacekeeping operations. During peacekeeping operations they are meant to augment an Army infantry battalion. Their role is very similar to the now disbanded Marines. However, it should be noted that this squadron has never had the same level of training and for a long time have been substandard when compared to basic infantry.