Des is the most recent holder of the poisoned chalice in a labour government that is the post of Secretary of State for Defence. But let's face it, he not only manages to hold down this demanding job on a part time basis, he is also the Secretary of State for Scotland. Here he has proved to be about as useful as tits on a kipper. Can only be considered competent when in a room with Hazel Blears and Tessa Jowell which frankly sort of like saying Harold Shipman wasn't that big a murderer next to Hitler.

Ignoring for a moment the fact that he knows zero about the armed forces... during the Iranian hostage balls up, he went missing when he should have been making informed decisions about stories and how they should not be sold to the media. Did more to make the British Armed Forces look stupid than the Iranians did.

He holds this post jointly with the post of Secretary of State for Scotland as of June 2007 and as such is universally hated by scots and squaddies alike. Scots squaddies would like him strung up right now! Also goes to show under a Neu Arbeit government, defence of the nation and the (now totally discredited) covenant with UK armed forces is a part time job.

Not to be confused with...

...the other Swiss Toni 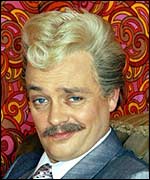