The above picture was young Trans_Sane at a recent karaoke night in a friendly bar on Canal Street in Manchester.

He first rose to prominence as an amateur stalker in the chat room. He attended a small number of Crawls before finally succumbing to the lure of Chez Slug where he blustered and bluffed his way out of sleeping with the lady of the house. This should have raised alarm bells in all quarters but it was only when a small gathering was called by The_Snail for the purposes of drinking and merriment. Trans was notably late to the party, presumably to stop and talk to passing gentlemen motorists. The callsign known as Jarrod who was also invited to the house greeted the young man with a gentle kiss on the cheek, Jarrod makes no secret of his attractions and was pleasantly surprised by the welcome response to his advances. The rest of the tale is best told by two other honourable Arrsers who were also there:

At a recent gathering of likeminded drunks (and Mac_uk), young Trans-sane - from now on to be known as Snuggles, retired to bed early.

Now which bed would any sensible straight male choose to retire to? At this point young Snuggles was visited by our old friend Emperor Mong.

And thus it was.

Sadly for our hero the next morning these self same maidens and Jarrod made the realisation of where he had spent the night. He was last seen making a hasty exit while looking terribly sheepish after giving his new bed partner a swift kiss on the cheek.

As an innocent participant to this gathering of the faithful I observed the great Emperor's thunderous appearance and proclamation. There were many available bedspaces for this young thruster, two lovely ladies and a self confessed predatory manwhore.

His greatness appeared in a flash of rainbow coloured light and intoned unto him ..

EM: "Young Trans, you are a lifelong straight bloke. why on my wonderous Earth would you want to join these beautiful wenches in their fetid stinking pits? If you have a quick look through that door you will see a very comfortable bed that will later be occupied by a raving hermer, I'm sure you will be completely safe as you lie in slumber. When he comes up in a few hours after a skinful of alkyholic beverages he will respect your privacy and merely recline beside you and leaving you totally unviolated. Go on my son, crack on and get your head down. You'll feel so much better in the morning"

TS: "Of course Oh Glorious one. My eyes are tired and I feel as though my virgin back passage is sacrosanct."

The sun shone over North Yorkshire next morning and all was well in the world, the previous days rain had caused a beautiful rainbow over said house of debauchery. Feeling slightly unclean our young hero rises to greet the new day, hobbling slightly he wandered down the stairs to find the great emperor sat at the kitchen table having a sly brew. pulling up a chair he lays his head in his hands as the ultimate one informs him that there is absolutely no way that anyone would use the time between his escaping from the clutches of a madman and reaching his safe domicile to tell the entire world of his foolishness"

On reaching home he looked at his computer screen to see a new message...

From: The great and glorious Emperor Mong

You might want to check your socks you're wearing, just don't do a DNA test on it

This fine gent has had some poor luck with ladies in the past. One previous significant other (the Regimental Duty Bike) forced him to nail his foreskin to a plank of wood in the heat of passion. It was even more disturbing for him that he actually found this to be an arousing sensation and now regularly finds solid objects for him to attach himself to. His ultimate aim is to be able to attach his foreskin to the convoy plate of a Bedford 14 Tonner and be pulled along the motorway on rollerblades. Good luck Trans!

On the seventh of February, in the year of our Lord, it came to pass that Trans Sane had taken it upon himself to hold a meeting of like-minded individuals, also known as The Manc Crawl, such was the clamour to attend this event that somewhere along the line no-one knew where to go and thus, this major happening was only attended by 3,yes just 3 people including young Trans, thus making this the least attended Crawl in Arrse history. Well done, Trans, fame at last. Said Crawl ended around 21:00 and our hero purposefully stayed out of chat seem that he was out on the tiles all night,but posted on the Manc Crawl thread @ 03:30 so giving him some kind of kudos or street cred amongst his fellow Arrsers. A reliable source has reported that Trans was actually logged into MSN at 22:00.

It appears that our hero has found himself what can only be described as 'a bird'! Now while this would be a cause for celebration amongst his wellwishing friends it has to be done with a sense of trepidation. From early reports it would seem that the new Mrs Tran may in fact be a 6ft 4 Ukrainian shot put called Olga. Apparently she picked him up (literally) during one of the rare occasions he ventured in to see what a Gymnasiums interior looks like. Their eyes met over the 80Kg dumbells she had in each hand and the rest is history

It seems our young thruster cannot resist the Sirens call and once again found himself at Chez Slug to provide entertainment for the birthday of the lady of the house.

After allowing himself a couple of wine gums and a sherbert dibdab Trans was a bit worse for wear and in a slurring voice began to tell all of his deepest darkest secrets. Many years ago this Hong Kong Fuey hero trained under the almighty Mi-ya-gi, the venerable old leader of an ancient sect of warriors versed in the martial art of Mong Fu. So dedicated were these warriors that they shave each others bodies and knit the resulting hair into bobble hats. It was after he completed his training, after many years of constant practice and self gratification, and £12.99 to ebay that Trans Sane was awarded the prestigious AGC coloured belt and crotch protecting egg cup combination that marked him as a master of the art. It was then that he was also given his warrior name, Tu Foo Poobs was born this day.

Master of all forms of combat, drunken monkey, snake, mongoose and his speciality style....... begging puppy

Breaking news!!! Our hero has finally admitted his perversions. Totally out of the blue during a chat conversation the following line appeared, I'll leave it to others to make of it what they will

[Trans-sane] 9:18 pm: Only manfat I've ever tasted mac was my own. Nearly put my back out reaching as well

You couldn't make this stuff up!! 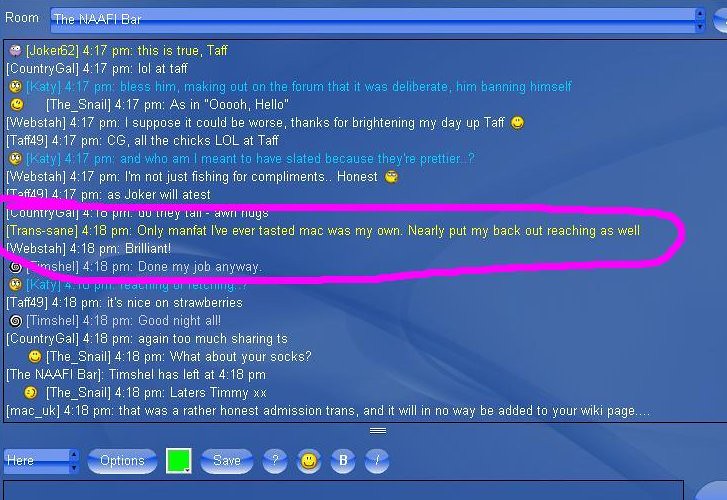