An illegal state in Moldova twinned with North Korea. This joke country was/is used as a puppet state by Russia and other countries for trafficking arms, wmd's and piss ridden vodka as well as prostitutes around the world. 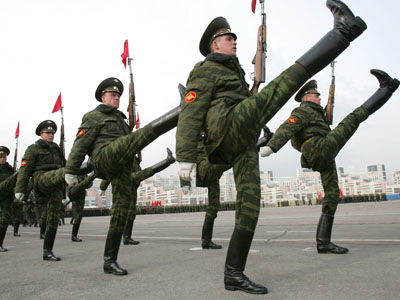 As of 2007, the armed forces and the paramilitary of Transnistria were composed of 4,500-7,500 soldiers, divided into four motorized infantry brigades in Tiraspol, Bender, Rîbniţa, and Dubăsari.

The air force is composed of :

Following the collapse of the former Soviet Union, the Russian 14th Army left 40,000 tonnes of weapony and ammunition. In later years there were concerns that the Transnistrian authorities would try to sell these stocks internationally, and intense pressure was applied to have these removed by the Russian Federation.

In 2000 and 2001, the Russian Federation withdrew by rail 141 self-propelled artillery and other armoured vehicles and destroyed locally 108 T-64 tanks and 139 other pieces of military equipment limited by the Treaty on Conventional Armed Forces in Europe (CFE). During 2002 and 2003 Russian military officials destroyed a further 51 armoured vehicles, all of which were types not limited by the CFE Treaty. The OSCE also observed and verified the withdrawal of the 48 trains with military equipment and ammunition in 2003. However, no further withdrawal activities have taken place since March 2004 and a further 20,000 tons of ammunition, as well as some remaining military equipment are still to be removed. In the Autumn of 2006 the Transnistria leadership agreed to let an OSCE inspectorate examine the munitions and further access agreed moving forward. Recent weapons inspections were permitted by Transnistria and conducted by the OSCE. The onus of responsibility rests on the Russian Federation to remove the rest of the supplies.

Transnistrian authorities declared that they are not involved in the manufacture or export of weapons. The OSCE and European Union officials state (2005) that there is no evidence that Transnistria "has ever trafficked arms or nuclear material" and much of the alarm is due to Moldovan government's attempts to pressure Transnistria.

Foreign experts working on behalf of the United Nations say that the historically low levels of transparency and continued denial of full investigation to international monitors have reinforced negative perceptions of the Transnistrian regime, although recent cooperation by Transnitrian authorities may reflect a shift in the attitude of Transnistria. Also it says that the evidence for the illicit production and trafficking of weapons into and from Transnistria has in the past been exaggerated, that although the trafficking of light weapons is likely to have occurred before 2001 (the last year when export data showed US$ 900,000 worth of 'weapons, munitions, their parts and accessories' exported from Transnistria. The report also states that the same holds true for the production of such weapons, which is likely to have been carried out in the 1990s primarily to equip Transnistrian forces.

The OSCE mission spokesman Claus Neukirch spoke about this situation: "There is often talk about sale of armaments from Transnistria, but there is no convincing evidence.